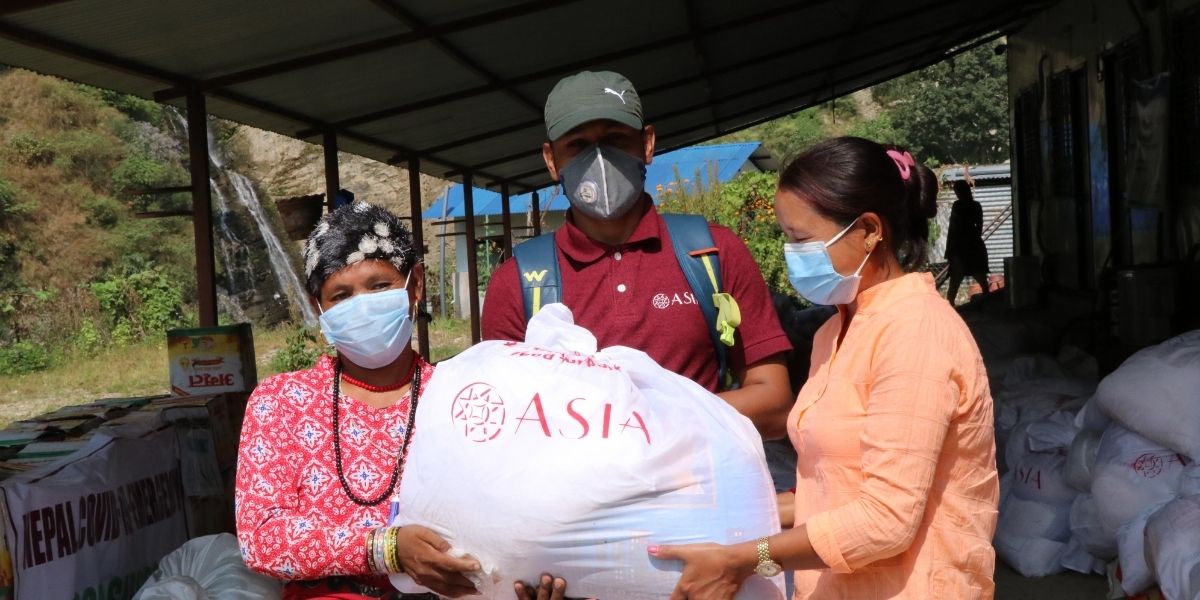 In Nepal, throughout the Covid-19 period, ASIA supported several communities and people in difficult situations by distributing food, protective materials to deal with the pandemic and organizing awareness campaigns to prevent the virus.

In the first week of July 2020, ASIA visited one of Haku’s internal refugee camps in Rasuwa.

The inhabitants of Haku were already considered an ethnic minority, disadvantaged and marginalized people from society. After the earthquake their life was even harder as these people still live in temporary shelters without owning a home, their children do not have adequate schools and have to travel several kilometers to reach school. Their newborn children are often undernourished, pregnant women cannot eat enough nutritious food and older people suffer during the winter and summer. Sometimes monsoons sweep away their small shelters and the situation is dramatic.

Their survival strategy before COVID-19 was to work on a daily basis in several hydroelectric sites and on private farmland with very low daily incomes. With the advent of the pandemic, all work was suspended and the people of Haku began to have many debts in local shops because they have no chance of making money.

Internally displaced people in Haku, in the Rasuwa district of Nepal, are in serious food emergency and have requested support from ASIA. There is no one to support them, they only received a few kg of rice from local authorities.

These are the main activities of the project:

Like all emergency projects and other development projects, ASIA always follows certain procedures and preparations to plan the planned intervention well. For this reason, the various meetings with the local district government and non-governmental organizations operating in the area will be organized before the intervention. A detailed plan for the distribution of food items will be prepared in the presence of the local government, the leaders of the refugee camps and local security officers. During the preparation a distribution plan will be disseminated among the interested parties.

Among the many needs of refugees, the most urgent need is to have food to survive. 680 families are victims of a serious food crisis due to the blockade of COVID 19. It was requested by the camps to provide a food package that includes: 5 kg of rice, 2.5 kg of Atta (wheat flour), 2.5 kg of Maida, 2 kg of Dal (black + red lentil), 1.5 liters of cooking oil, 1 kg of Chana (chickpeas), 1 kg of beans, 1 kg of sugar per person for 1 month.