Do you know that Losar is celebrated also in Nepal and Mongolia?

Home > Uncategorized  > Do you know that Losar is celebrated also in Nepal and Mongolia? 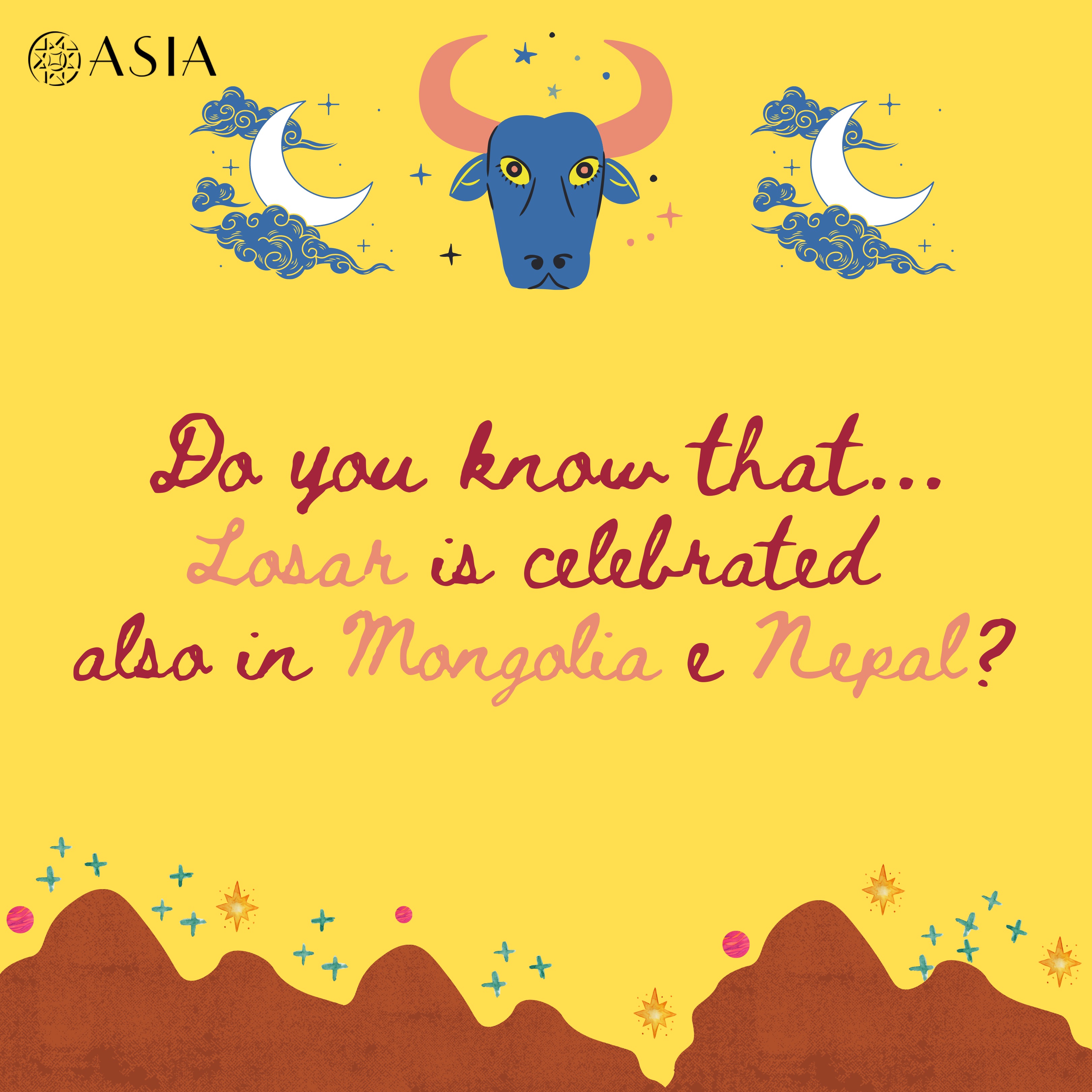 11 Feb Do you know that Losar is celebrated also in Nepal and Mongolia?

Posted at 17:45h in Uncategorized by wpadmin 0 Comments
0 Likes

Not only in Tibet this is New Year’s time! We speak of “time” because Losar, Tibetan New Year, never happens the same day, but it corresponds to the first new moon in the first month of the year according to the Tibetan lunar calendar.

Losar is celebrated also in other regions of the world where ASIA projects are active. For example, in Nepal there are three different Losar and in Mongolia today it is a very special day, because today is New Year’s Day! In mongolian it is called Tsagaan Sar, which means White Moon and marks the advent of spring!

Lunar new year, or Tsagaan Sar (White Moon) is the most long-lasting and joyful feast in Mongolia. It is called White Moon because this colour represents purity and wellness according to Mongolian culture. This is also why most of the food served this day is white in colour!

This feast is celebrated since Gengis Khan times, when the emperor ordered that every year the dawn of spring should be celebrated to pay homage to the new-born animals (such as sheeps and goats) and to the rising of springtime. Then, during the 16th century, when Buddhism finally took root in Mongolia, Losar celebrations were joined to religious rituals and political meanings.

Nowadays, one of the most important customs during Tsaagan Sar is to visit each other and exchange greetings (zolgot). It is also an opportunity to know and meet relatives and to transmit traditions to the younger generation.

In order to be ready for New Year’s Eve, the day before families usually clean and put in order the house intensively to best welcome the new year.

Then, the New Year’s Eve, called Bituun (Dark Moon), it’s the first real day of celebrations: families finish cleaning, prepare meals and set up the feast for the day after, making sure that the deels, customary dresses for Losar, are ready. Already this very night they start to celebrate through rituals and food offerings for the gods. Thus they put some ice on top of the entrance door, because it is believed that during Bituun Night the goddess Palden Lhamo visits citizens’ houses and that her horse drinks the melted ice. During this night it is also inauspicious to sleep at someone else’s house, because there is the risk that one could spend the whole year homeless, wandering here and there.

On the first day of Tsagaan Sar, which is also the first day of spring according to mongolian lunar calendar, people usually wake up before sunset, wear new dresses, especially deels, and exchange greetings with each other, starting with the close family. Firstly greetings are given to elder people! It is curious to know that husband and wife do not exchange greetings. Then people go visiting the elder relatives. When greeting each other, younger people, wearing a hat, stretch both arms with palms facing upwards looking to the elder person asking: “How are you? Have you had a great winter?” Finally they wish each other happy new year, they celebrate all together and the host-family gives a present to the guests.

Unfortunately, in Mongolia Tsaagaan Sar has not been celebrated for two years due to Covid-19 pandemic. This year the State Emergency Commission and the government have planned a lockdown from 11st to 23rd of February, encouraging people to celebrate Losar only at home. Huge companies such as Oyu Tolgoi, top mining company in Mongolia, are promoting an online campaign called “Let’s greet each other online” encouraging people to stay home and express their reciprocal love exchanging greetings online.

In Nepal there are three different Losar: Tamu Losar, Tamang Losar e Gyalpo Losar, which follow the Tibetan lunar calendar but differ one from the other because they are the expression of cultural traditions of different ethnic groups all over Nepal.

Tamu Losar is celebrated by the Gurung community, also called Tamu, which mostly lives in Dhualgiri mountain’s region and on Annapurna mountain chain. On the very day of Losar, the lama installs a Buddha statue in every villagers’ house. It is then worshipped and honoured by the whole family. Subsequently they eat sel roti (bread rings made by rice wheat), khapse, achar (pickles), meat and tonbaa (homemade beer).

People meet each other and welcome the new year dancing and singing traditional songs called Dohori. Dohori means “back and forth”, indeed this dancing style is performed by two groups of people, one all-male and another all-female, and in turn one questions and the other answers.

Tamang Losar is celebrated by the Tamang community, which lives in the Langtang region and all around Kathmandu valley. The first day of Losar, Tamang people clean and decorate houses, and, wearing traditional showy dresses, go visiting monasteries and stūpa, where they join religious celebrations that keep aside negative forces and attract positive ones for the sake of the family and loved ones. Then they dance and sing Tamang selo, traditional Tamang chants,  full of humorous themes, as well as sentimental stories and deep and philosophical meanings. All this to the rhythm of the damphu, a typical Tamang frame drum.

Gyalpo Losar is celebrated by the Sherpa community, which lives in Mount Everest region. These celebrations are really similar to Tibetan ones. They start the first day of Losar, when the family prepares and eats khapse with a special Sherpa recipe while drinking changol (a sort of tibetan beer). Then every member of the family cleans and decorates the house, to finally eat Guthuk (are you curious about that? We talk about it in this FB post: -….) At midnight they exchange greetings saying one to each other: “Tashi Delek!” and perform traditional dances, very similar to Tibetan ones, that play out a battle between demons and deities.